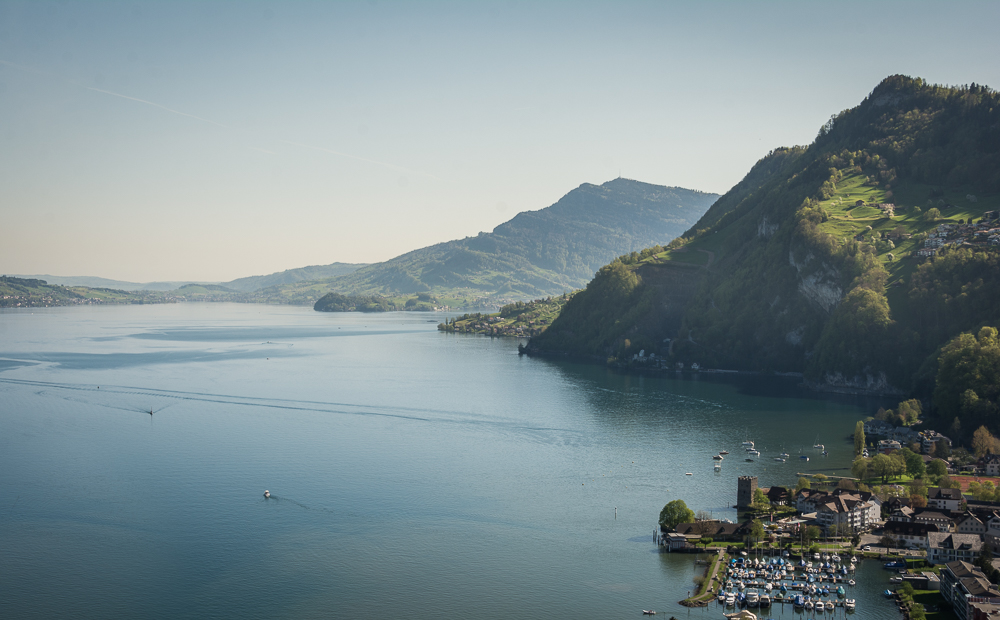 Four cantons, one lake, summery weather, and a bunch of great views…

In Denmark, when you head south to enjoy some warmer temperatures, people will often tell you to bring back a bit of the warmth – which rarely works though… However, ever since I came back from my recent holiday in Spain, weather in Zürich has been more or less amazing. It culminated last weekend with lots of sun and temperatures in the high 20s – which is pretty good, considering it was still only April! In that kind of weather I didn’t want to just stay inside, so I consulted the internet for some hiking routes around the Vierwaldstättersee (which I had visited the year before on my trip up Rigi) – which is not only a really nice area, but also quite close to Zürich – and found an interesting half-day hike up a hill on the south-western part of the lake.

The weather proved to be as nice as anticipated, and with spring having really arrived, had flowers and green plants everywhere. Can’t really imagine how it could have been better! After a really nice hike, I ended up spending the afternoon in nearby Luzern afterwards – which I thought was about time, after almost two years in Switzerland ;) I wasn’t the only one with that idea though, and had to share the space (especially around the iconic Kapellbrücke) with throngs of other people. For some reason the very nice area around the old city fortifications were almost deserted in comparison though, and provided a nice finish on a great day!

Looking back here a week later, I almost feel a bit nostalgic also – as this trip may be the last one documented with my trusty Nikon D7100. After more than 4 years of good use, I’ve ended up going ahead with a slight upgrade – more on that in a future post – until then, enjoy the pictures here :)