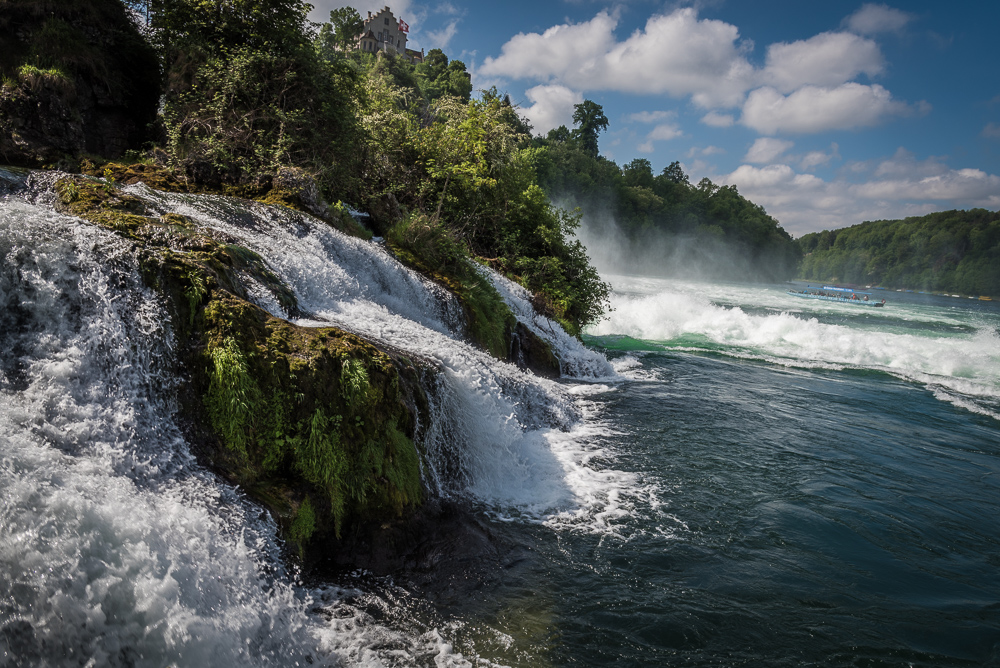 The Rheinfalls in Full Frame

As teased in my last post, after many careful considerations, I have very recently gone ahead with a slight upgrade of my trusty Nikon D7100.
(Warning – camera tech-talk coming up – skip to the next section if you just want to read about the waterfalls ;)

After that disclaimer, back to camera-talk! My D7100 has served me very, very well, but I was getting a bit annoyed by the optical quality of my 18-200mm lens – even though the flexibility definitely is amazing, I started to often feel limited by the lack of sharpness. After having looked around a bit, I couldn’t really find a new lens that seemed like a good substitute on the crop-sensor D7100, and since I had also toyed with the idea of going full-frame, I ended up getting a Nikon D750 with the 24-120mm lens. Having read a bit around, the 24-120mm was obviously not the optically best lens available, but it sounded like it did pretty well for its zoom range (which would definitely make it better than the 18-200), and was even a bit wider at the wide end – something that I’d also wanted (although the difference isn’t huge…). And obviously, the full-frame D750 would be a good step-up from the D7100, seeing as even though the resolution is basically the same, the sensor in the former is more than twice as big – meaning more light captured, thus lower noise and more sharpness. At the same time the camera itself is basically the same size, and has the exact same button layout, so switching couldn’t really be easier. It also uses the same battery, is supported in my existing editing software, and, since it’s a couple of years old now, was available at a really good price.

So – fast forward to the new camera having arrived back home with me, and my fingers itching to go give it a decent spin. With four consecutive days off due to the Ascension holiday (and me having moved my labor day holiday from last week), I decided on heading north, to the canton of Schaffhausen – more precisely to the Rheinfalls. 150m wide, 23m high, and with a summer average of 600m3 of water per second constantly passing through, it’s rather impressive! Numerous platforms have been placed at the sides of it, to allow visitors to get really close to the action – and interestingly enough, without really getting wet! After having spent the early morning trying to get a good bunch of different pictures of the falls (seeing as it’s the main motif, it took some work to not get all the pictures looking the same ;), I went for a nice hike in the backcountry also. This was mostly through woods, which weren’t as photogenic as the falls though (thus the rather obvious lack of pictures from that part of the day). After the hike, I went back to the falls for a cup of coffee and some more pictures (now with afternoon sun – and a good heap of extra tourists) – before catching a train back to Zürich after a day well spent.

Looking at the pictures at home, it seems I definitely got what I expected – even though it’s probably not visible from the low-res versions of the images here, the shots are a lot sharper – and the dynamic range is insane too – lots of extra data to work with from the image files. All in all – a great day, and some new equipment that is working well :)