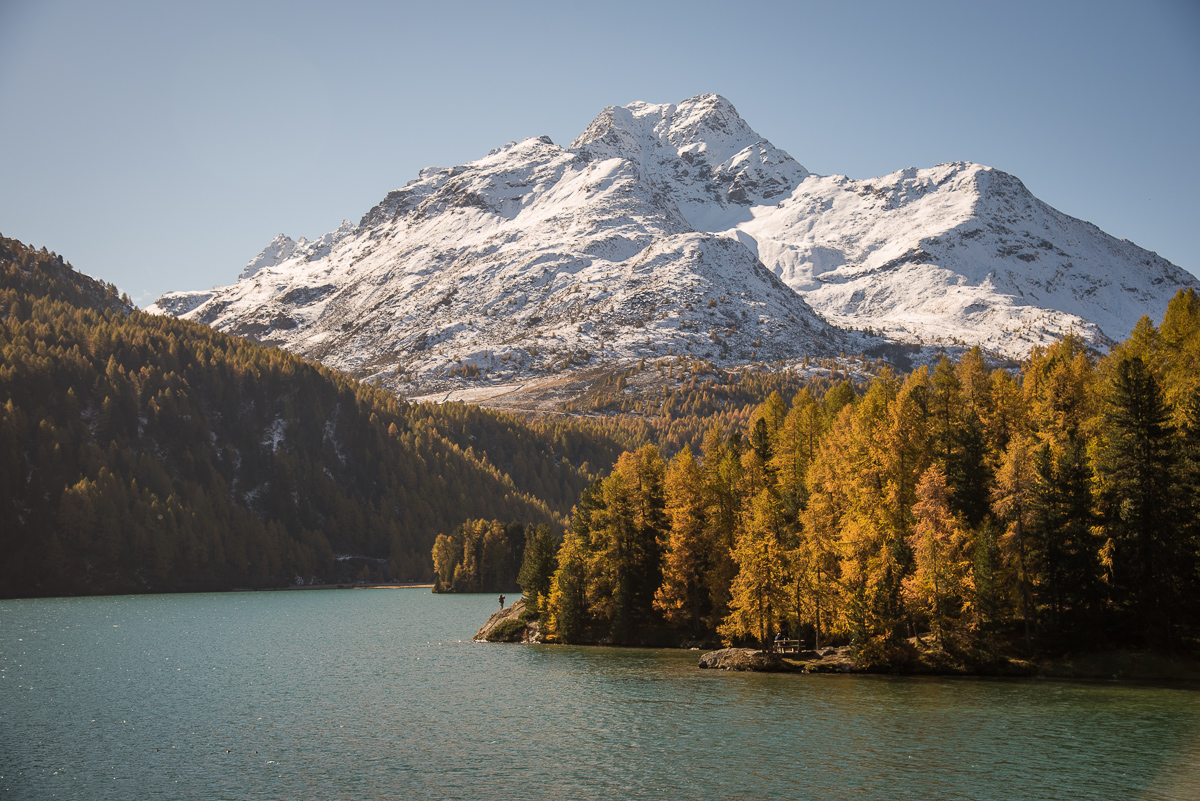 Autumn – the days are getting shorter, the air cooler, and the colors more and more amazing for every day that passes. My wife and I had managed to keep a weekend free in the calendar, and decided that we wanted to go somewhere special. As usual, the problem in Switzerland is not so much finding a nice place to go, but more deciding which of the many, many nice places to actually choose. After investigating things for a bit, we found a solution though: Sils Maria – in Engadin, in the canton of Graubünden. It was far enough away that it wasn’t practical to go there for a single day, there were mountains and lakes, the hotel we had in mind looked decent too, and apparently the area was full of larch trees that were known for changing their color to a beautiful golden yellow in autumn. Didn’t sound too bad!

So, off we went. 4 hours of train and bus later, we arrived. The air was crisp, the sky dramatic, and after checking in, we quickly went out for the first of many hikes. Initially only a short one down to the shore of the Silsersee, to enjoy the sunset. On the morning after though, we had bigger plans – to head up the Muott’Ota ridge.

The hike went through forests (which apart from the wonderfully colored larch trees, also contained both deer and squirrels), with occasional magnificent views over both the Silser- and Silvaplanersee. As we went up, things got a bit more wintery though. Since we were quite a bit up in the mountains, the first snow had already fallen, and the last snowfall was only a few days away. Having made it up past the forest, we decided that snowy winter hikes was a bit too early in the season, and took the next path down from the ridge (we were getting a bit hungry also). Passing through another section of larch forest on the way down, we made it to Val Fex – a quiet area, where public transport is by horse carriage. Having enjoyed a good (and well-deserved) lunch, we continued down to Sils Maria, to check out the wellness area of our hotel – not at all a bad thing to spend a bit of time on after a long mountain hike!

I managed to do a further quick late-afternoon and, on the next day, early-morning walk down to the lake to get as much of the more spectacular light as possible, before we then went for the full walk around the Chastè (a small, larch-covered peninsula in the Silsersee) around noon. The light was even more beautiful than the day before, and the numerous benches along the way invited to sit down and just enjoy the views and the fresh air (at least if you could find a bench that wasn’t already taken…).

Now only the 4 hour ride back home was left. Looking out the windows of the train, there were still amazing colors to enjoy. We were a bit sad that a wonderful weekend had gone by so fast, but also happily full of memories and thankfulness of the beautiful scenery we’d seen and adventures we’d had…