Above the clouds on Rigi

Last week I think I managed to hint a bit that there was more coming up – from the (probably) last adventure of 2021. At least, probably the last adventure in the Swiss landscapes. We’re celebrating Christmas in Switzerland this year, so I’ll be doing some adventures in the kitchen – but the results of that are more likely to end up in my belly, than on the blog ;)

Ahem. Anyways. Much of November had been foggy, grey and generally just plain “ungemütlich”. The leaves were gone, it was getting cold and wet, there wasn’t yet any good snow in easily reachable places, and going outside was generally just losing quite a bit of its usual appeal. We would often have several days without even seeing the sun. The weekend weather forecast was interesting though – even though we didn’t have much hope for better weather in Bonstetten, it looked like the higher regions would be sunny. So off we went to closest of the first “higher” mountains – Rigi.

I hadn’t been there since 2017, where I went with my parents in the spring. Back then, we drove to Weggis, on the southern side towards the Vierwalstättersee, hiked up to the peak at Rigi Kulm, then took the train and gondola back down to Weggis. This time we didn’t feel *that* adventurous though, and as Weggis is a bit cumbersome to get to with public transport, and as the gondola between Weggis and Rigi Kaltbad was in any case closed for maintenance, we instead opted for the full train-package, taking the mountain railway from Arth Goldau all the way up to Rigi Kulm.

The old mountain train was a bit of an experience in itself – and we had plenty of opportunity to enjoy it, as there wasn’t really much of anything else to look at for the first part of the ride. All the way from Bonstetten to Arth Goldau had been grey and wet, with about maybe 30-50m of visibility, and it was hard to believe that things would just magically get better just by going a bit upwards. But they sure did.

On the train, we started feeling that everything was lightening up a bit, and the grey sky started to get ever-so-slightly more blue. After a few initial “was-that-the-sun?” moments, it suddenly broke through for good. Clear blue sky, full visibility (well, apart from the forest that we were still passing through), and behind us, a thick ocean of clouds still hovering over everything below 800m.

We arrived at Rigi Kulm, and marveled at the views. To the west, we had Pilatus, to the south we could see all the way to the Bernese alps, and to the north, we could just exactly make out the TV tower on Uetliberg poking out from the clouds. From there, we hiked down to Rigi Kaltbad, had lunch, then back up to Rigi Kulm. It wasn’t a particularly difficult hike, so we took our time and enjoyed everything as much as we could, taking pictures, finding detours and being warmed up by the sun.

We planned to go back from Rigi Staffel late in the afternoon, but as we gathered on the train station, it was obvious that other people had the same idea. And in this case, “other people” seemed to be everyone else that was still on Rigi that day. We thus decided to wait another hour, and hoped that the next train would be a bit less full. That gave us time to have a cup of well-deserved coffee and to hike the rest of the way back up to Rigi Kulm. The sun had started to set, and with the still completely clear sky, the light was magnificent. It was almost dark when we finally got on the train, and drove back into the clouds that were still covering the lower parts of Switzerland. We were tired after a long day, but fully reassured that the sun still existed. 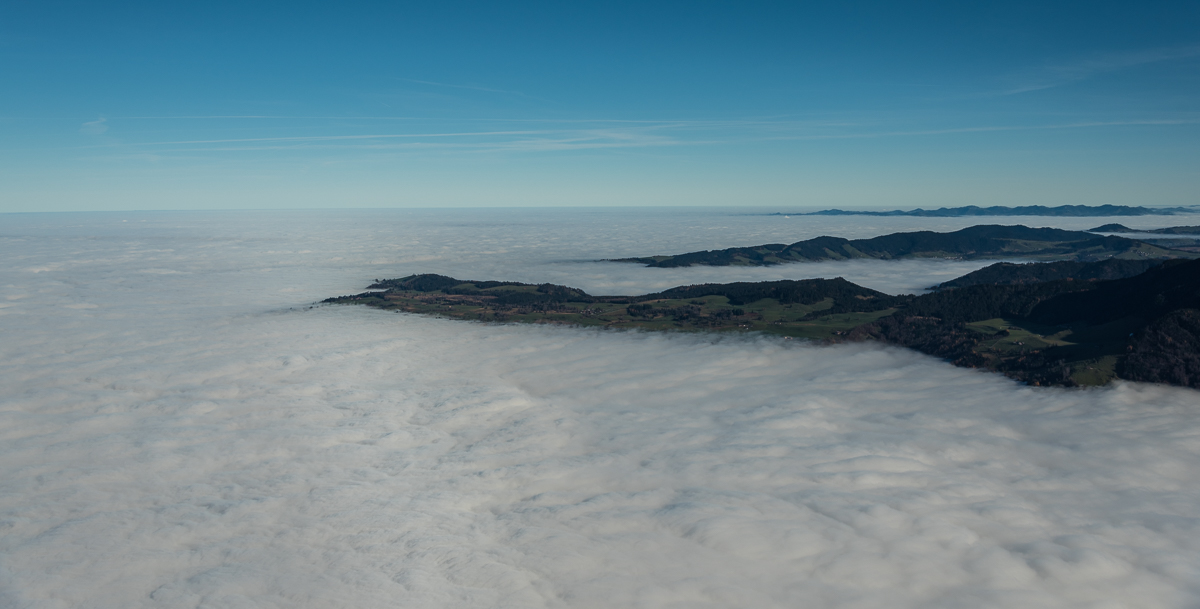 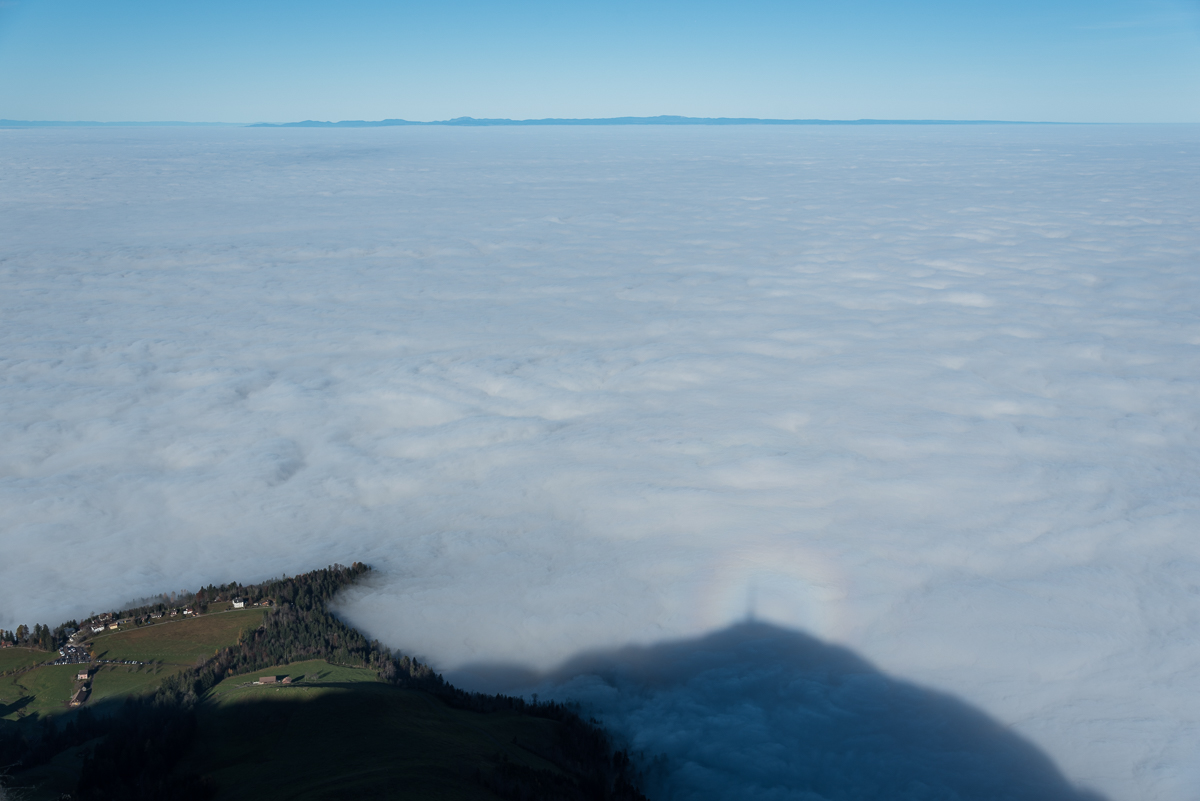 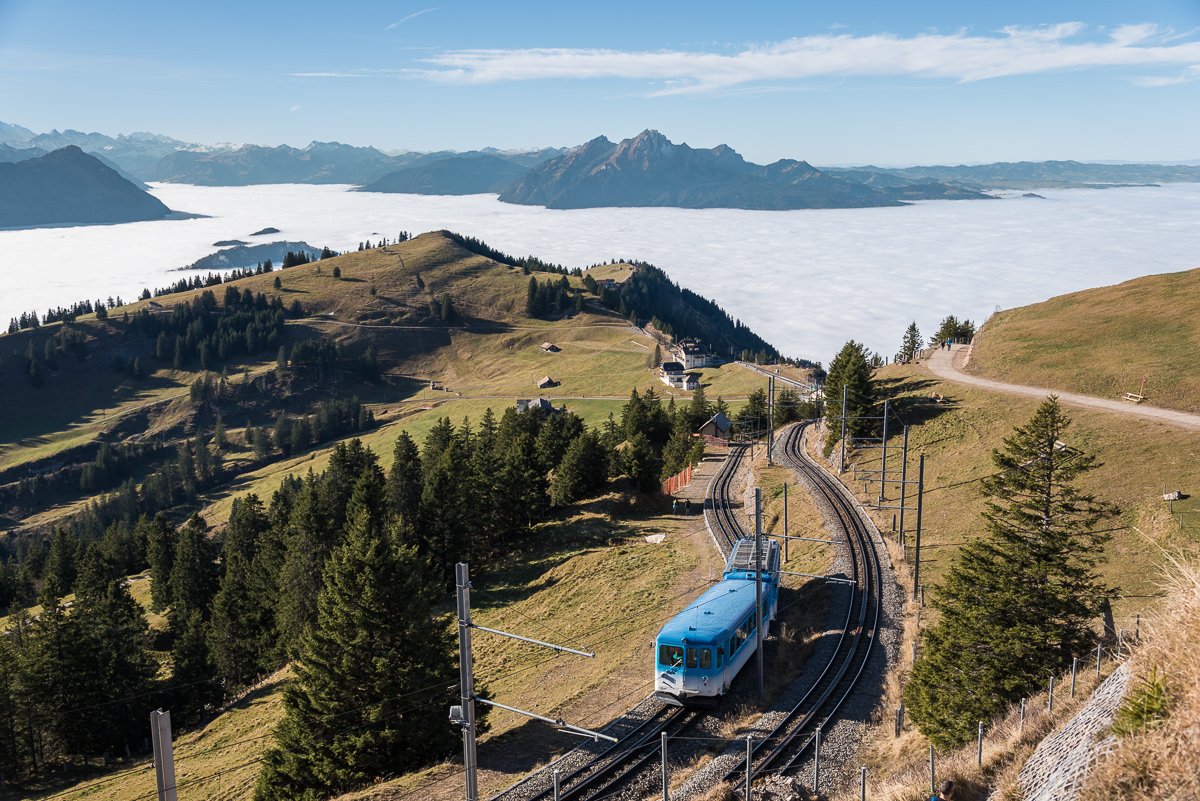 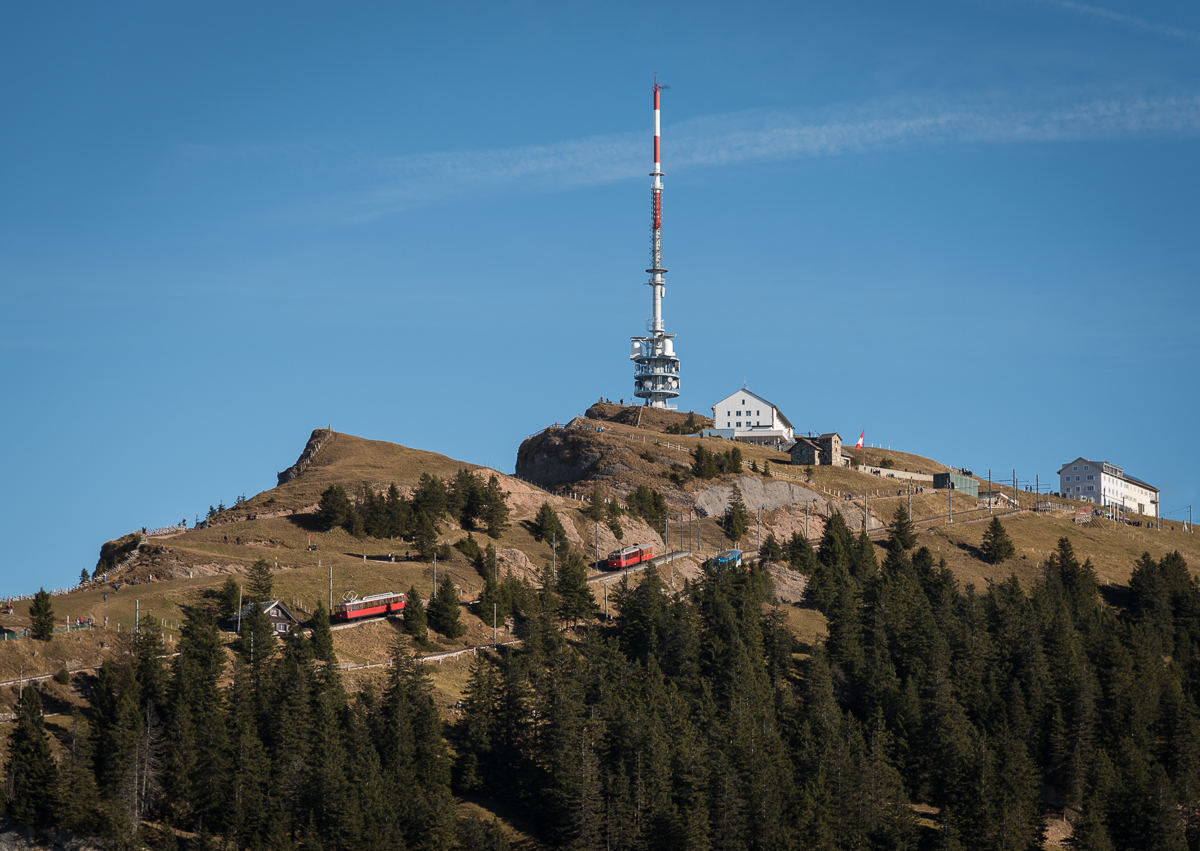 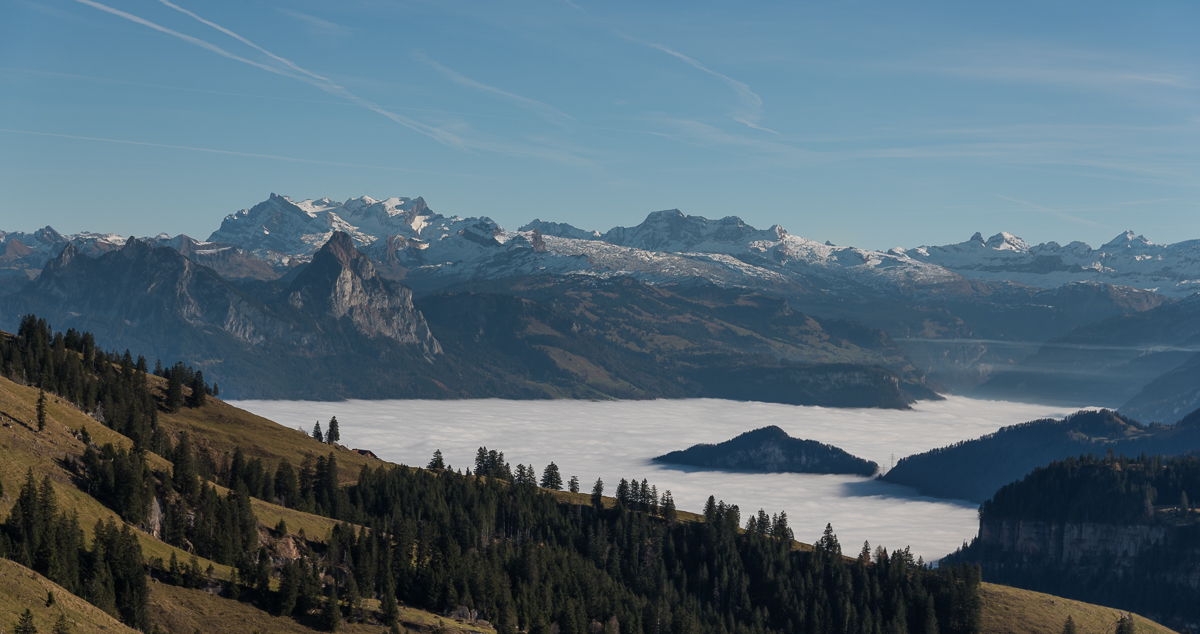 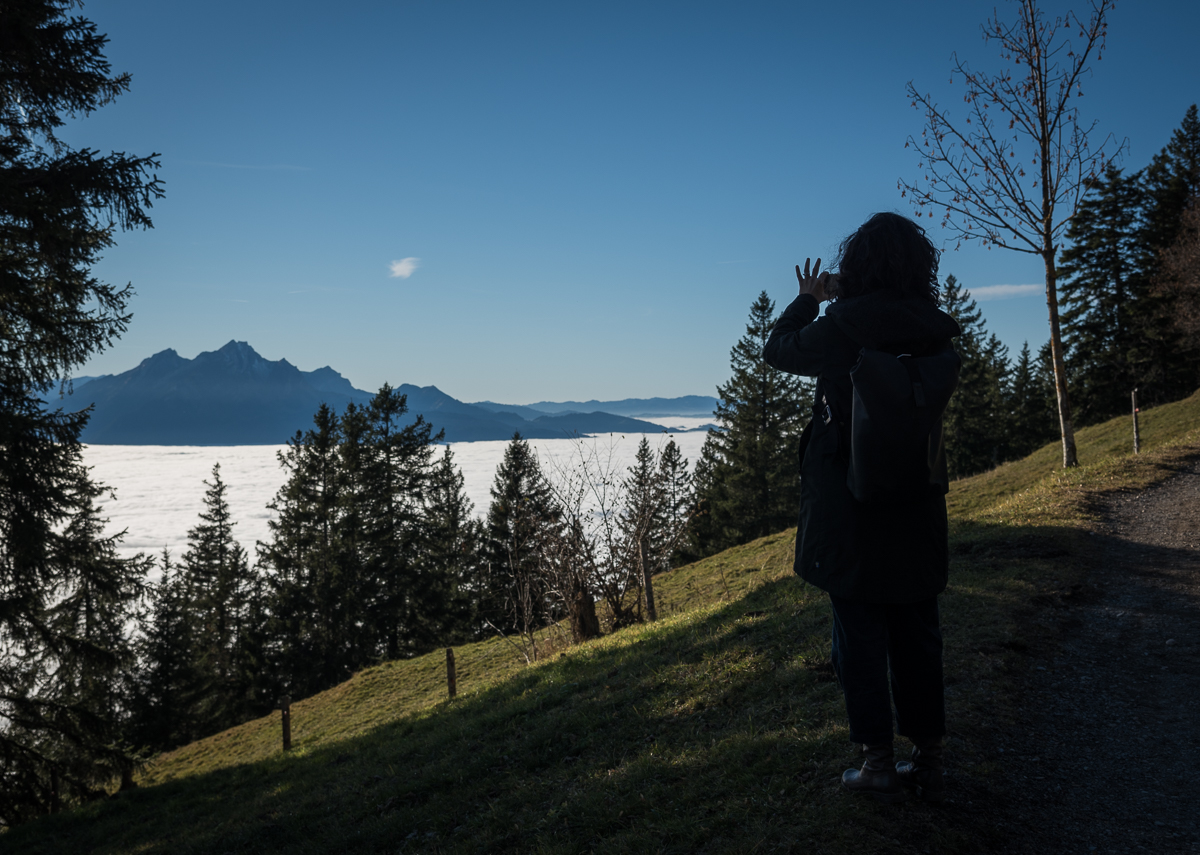 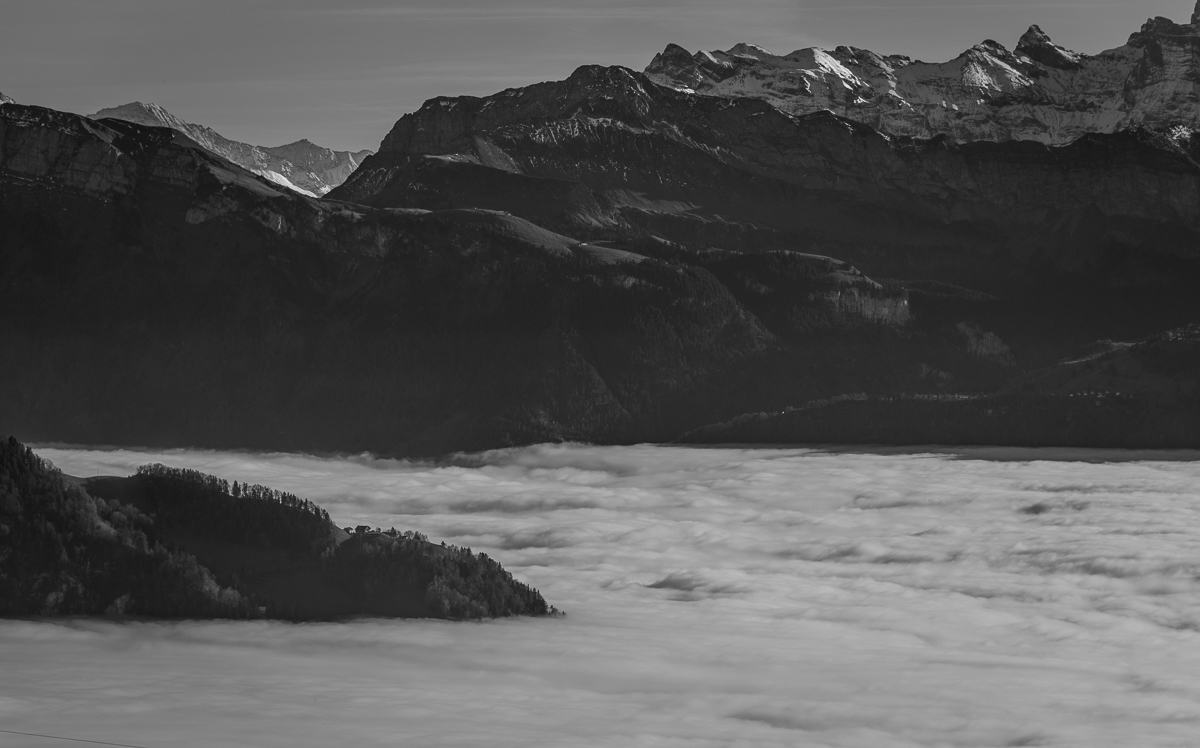 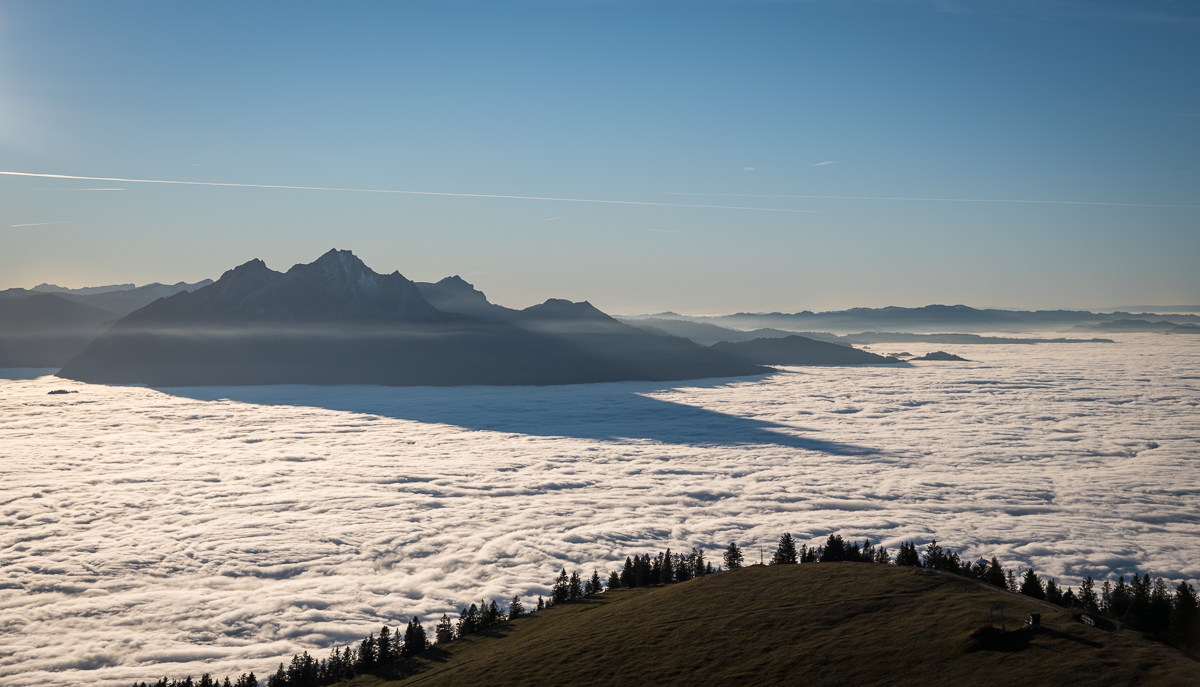 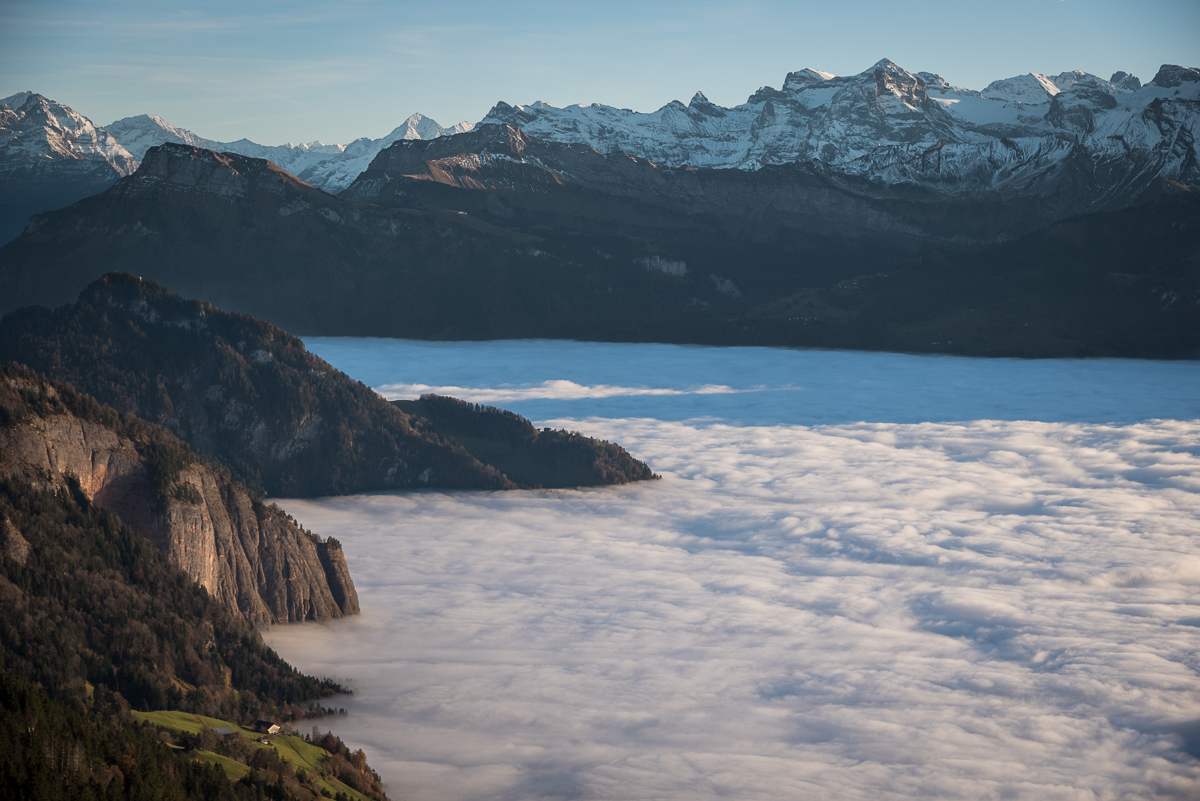 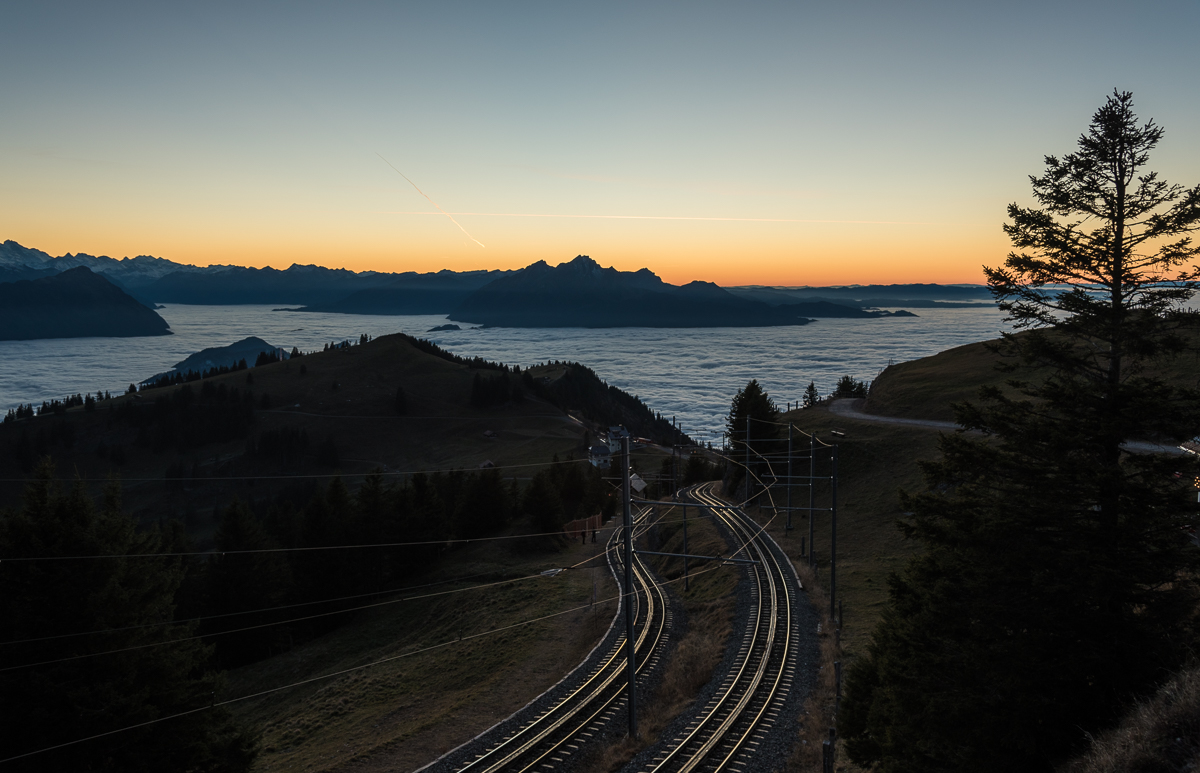